How To Win At Putt Putt 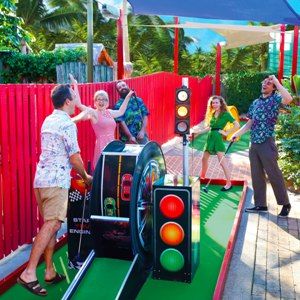 We get it, everyone wants to win at putt putt. So you’ll be pleased to know that in our 49 years at Putt Putt Mermaid Beach, we’ve picked up a few insider tips and tricks that will absolutely up your putt putt game. Here we’ll walk you through exactly how to take out the championship with practical (and sometimes cheeky) tactics.

Pick the right putter for you

Yep, every putter is different and we’ve even had some players asking to bring along their own! When you’re picking out the perfect putter, make sure that the top of the putter is below your belt line when you’re holding the putter about halfway down. Too long and you could spend the whole game fumbling, too short and you’ll be a crouching tiger for most of the course.

Is it just us or do overly competitive people make you feel more competitive too? If you really want to win at putt putt, we’d suggest playing the role of the under dog. Shrug and giggle when you get a hole in one like it was simply a fluke, cheer on your teammates when they score a good shot and make casual remarks like ‘oh, is it my go already?’ This will position you as a truly cool, calm and collected guy or gal just looking to have some fun - And not an absolute putt putt superstar about to whip them at the game.

If you want to win at putt putt, one of our biggest tips would be to keep your speed steady. Too fast and you’ll lose control, too slow and you won’t build the momentum to make it to the other side of the green (you know, the part where the hole is). The speed you’ll need will vary course to course. As a general rule, stop your putt when the ball begins rolling for a smooth takeoff.

Take control of the scorecard 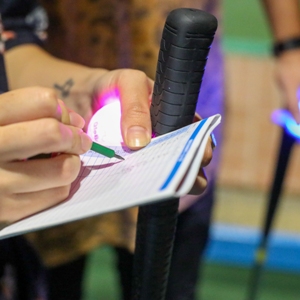 In all honesty, players generally don’t like being the scorer. Having to pick up and put down the scorecard every round seems to infuriate some putt putt peeps! But here you are, saving the day by taking control of the most important winning tool. And actually, you can download our free scorecard app and make it even easier for yourself. Now, this one is a bit risky so be sure you’re playing with people who don’t have a 100% accurate memory. Here comes the fun part, when no one is looking, shave a little off of your score and add a few figures to theirs. Did we just say that?

Forget your dominant hand. People who are most likely to win at putt putt will hold their putter with an equal grip. This means having your thumbs meet in the middle and face downwards. A lot of the time we see people bending their arms once they go to putt. You’ll find it to be much more effective to keep your arms straight, hold your putter naturally (not too tight or too loose) and rotate from your shoulders down, almost like a pendulum.

Do these warm ups

A typical golf warm up is to stand strong, hold your club across your shoulders and rotate side to side. Do not do this! It’s not something you typically see and your mates will know you’re up to no good. Instead seamlessly complete these exercises and no one will be the wiser. Here, give them right now.

● When choosing which course to take on, point out to the side and say ‘maybe this one?’ Slowly lean out in the direction of your arm for a nice bicep stretch. Repeat with all other courses switching arms for an even warm up.

● On your first hole, make a quick joke about the rules and ask if you can put one foot on the starting spot and the other one waaay out front. Everyone will of course think this is hilarious, so repeat on the other side. Shift your weight into your front foot each time to really open up those hip flexors. Genius!

If there’s one thing that says ‘I’m really good at putt putt and I’m going to beat you all’ it’s sensible footwear, a checkered vest and a flat cap. Instead, opt for a casual look. Sandals, your best beach going outfit and a really great hat are your best friend when hitting the green - they’ll never see it coming.

We’ve made is easier than ever for you to win at putt putt. You’ll notice guide boards at the beginning of each course to show you the most effective ways to make it to your next hole in one. Take a quick look at these before setting up and you’ll have a pretty good idea of what to do next.

Now that you know how to win at putt putt, come along for a game, host your next party or enjoy an arvo barbie with us!